Humans have created many magnificent monuments and works of art that have been resisting the edge of time for centuries. Those magnificent works of art and architecture are priceless, not just for our history, but for our culture too. And besides that, some of them are really interesting because of secrets they hide. We have decided to reveal some of those secrets to you. You will be amazed!

The Top Floor Of The Eiffel Tower 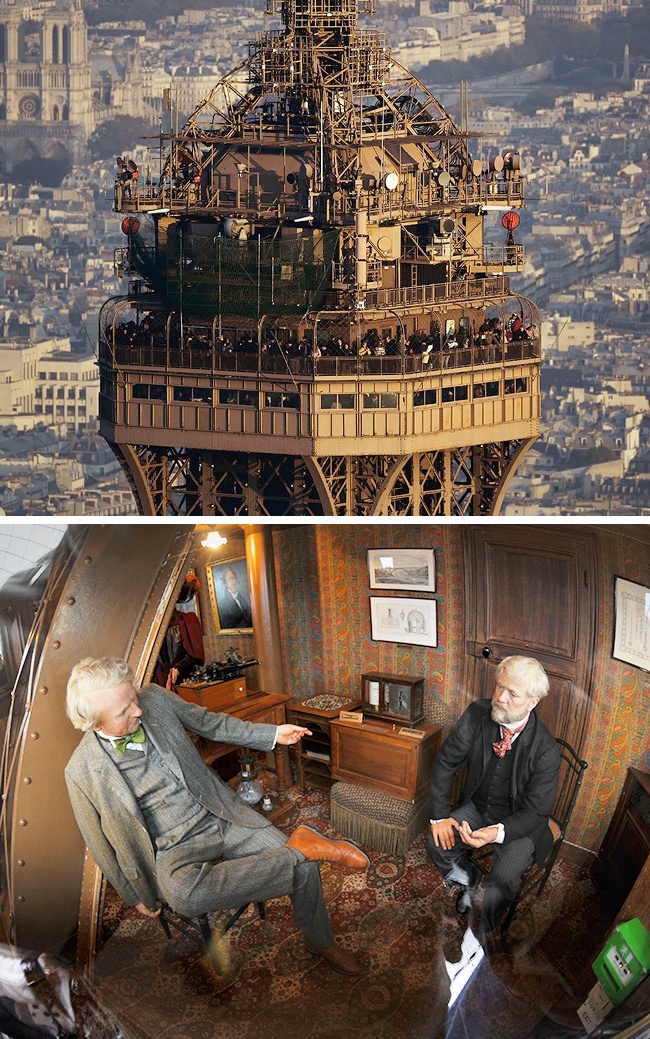 Gustave Eiffel who actually designed the Eiffel Tower made a special luxurious apartment on the top floor. He actually used that apartment to chill out and receive guests. Some of the most prominent figures of his period spent some time in that apartment which can boast with a kitchen, bathroom, two bedrooms, and a living room. Today, this apartment is just a museum.

The Broken Chain At The feet Of The Statue Of Liberty 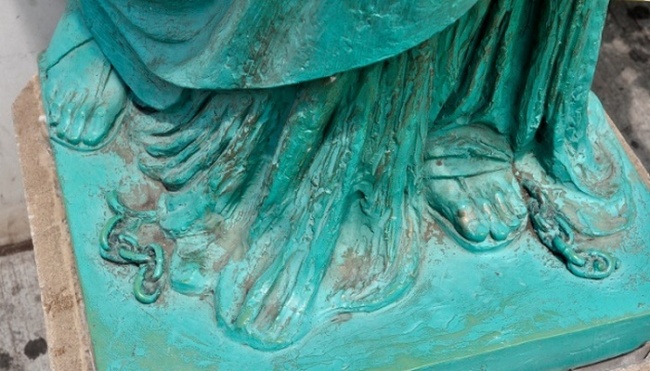 We all know that the Statue of Liberty was given to the people of the USA by the people of France. However. It was made as a special gift for the 100th anniversary of the Civil War. It should symbolize freedom, democracy, and the abolishment of the slavery in the USA. That is why there is a broken chain at the feet of this statue, but that is a detail not everyone notices. 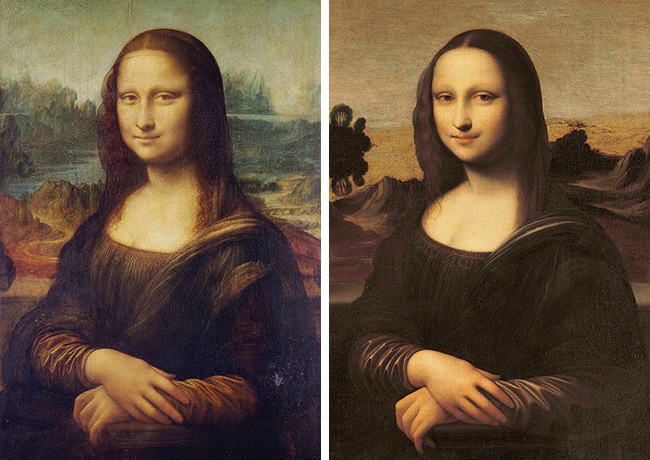 Many have tried to reproduce the famous Mona Lisa but it is believed that da Vinci himself made one more version of the same picture. However, that second version has a simply different perspective. One group of experts believe that this original copy was made by da Vinci, others believe that it was made by a totally different artist or even a couple of them. Majority of experts agree that this copy is just an earlier version of the original masterpiece. 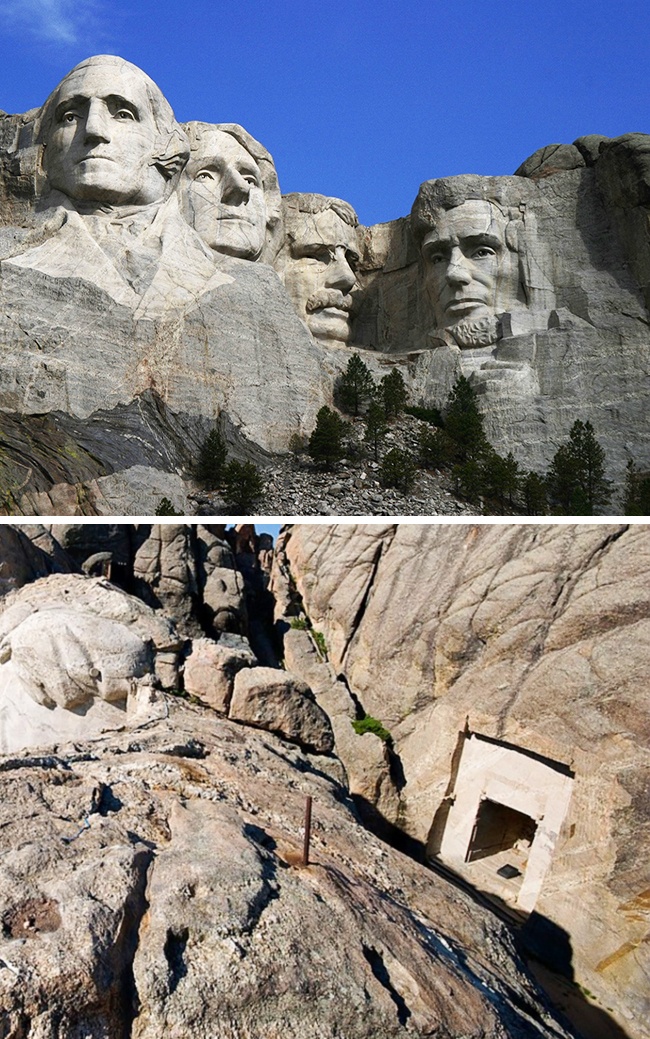 The original architect of the Mount Rushmore decided to make a cave behind the head of Abraham Lincoln which would have been used for a great Hall of Chronicles – a secret room where future generations would learn about the American history. However, that architect, Gutzon Borglum, died before he had managed to materialize that idea. In spite of that, the United States Government decided to finish his work so he placed copies of important documents and the memoirs of various presidents inside that unfinished hall. That is a true time capsule.

The Matterhorn at Disneyland 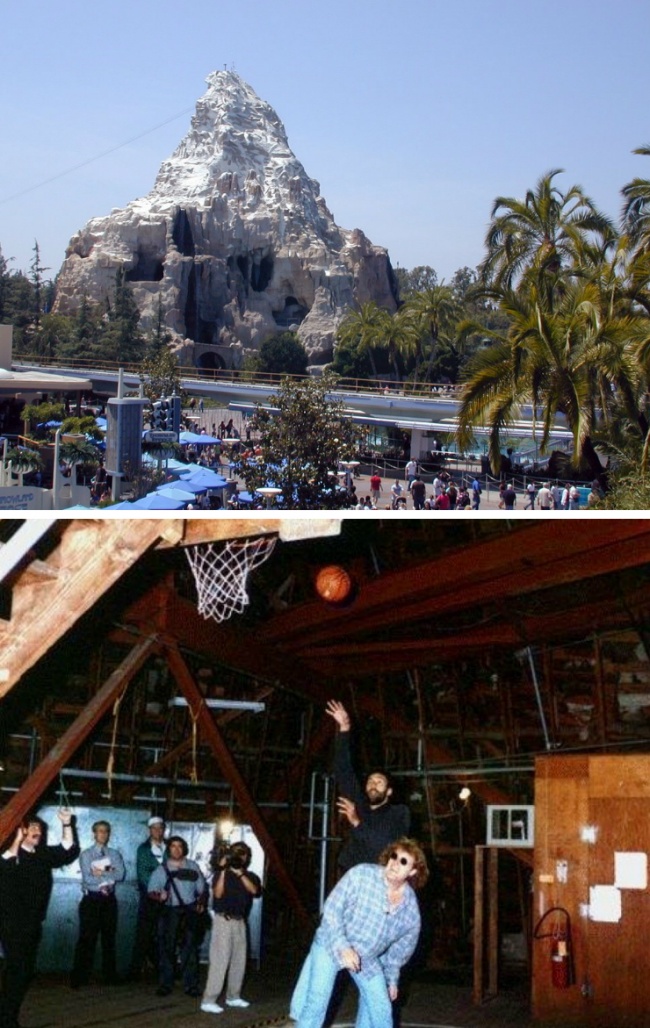 At Disneyland Park, there is the Matterhorn, a replica of a mountain in the Alps. That replica is the first tubular steel continuous track roller coaster. But that is not all! At the top of this “mountain”, there is a small structure that looks like an attic at the top of the house. That is a staging and break area for all the climbers. Inside that structure, there is a basketball court which has been attached to a flight of wooden stairs. All the climbers and crew members can rest there, play some basketball, and prepare for all the scheduled climbs or just to pass time if they don’t have anything else to do.

The Real Appearance of the Sphinx 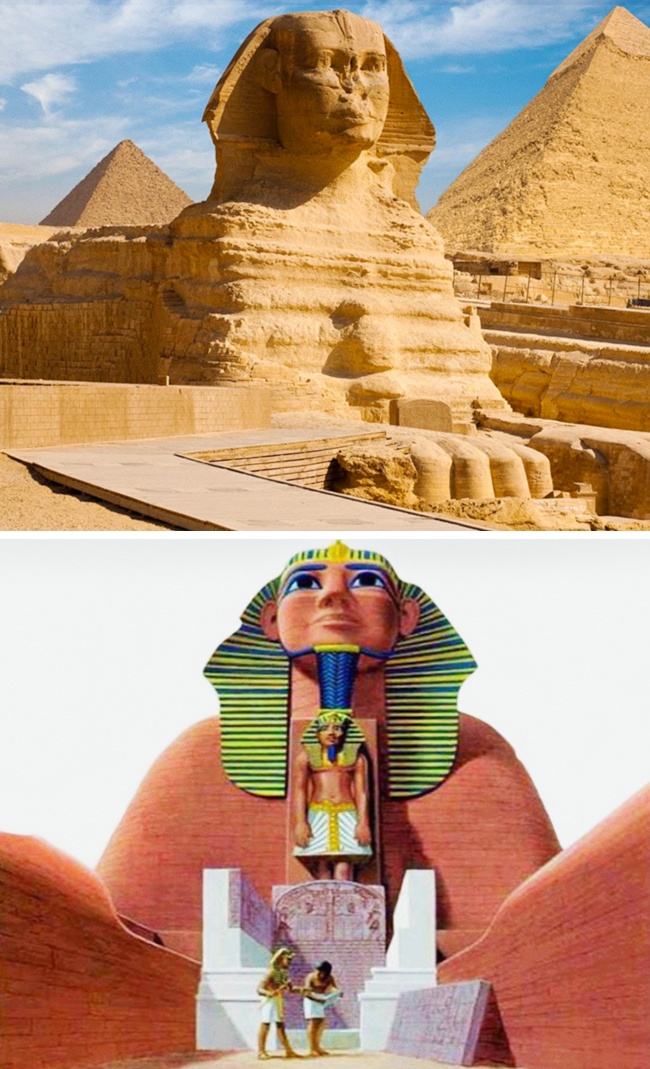 The Great Sphinx of Giza is the oldest statue in the world and everyone knows about it. The general opinion is that this statue represents a creature with the head of a human being and a body of a lion (or a dog). However, there is that second opinion that this statue once had the head of a lion or a dog that was replaced by some newer dynasty. The thing that experts know for sure is that the Great Sphinx was very colorful and traces of that color can be found all around the statue.

The Creation of the Leaning Tower of Pisa 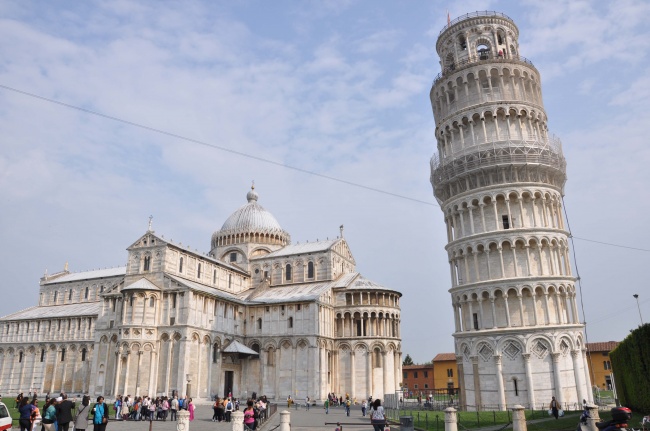 This tower has many secrets but the most basic one is who built the bell tower for Pisa’s cathedral. That has remained a mystery because it took nearly 200 years for this tower to be completed. All major historians believe that construction plan was developed by Bonnano Pizano, however, that might not be the case. The more logical candidate for that is Diotisalvi, who actually designed the baptistery which is next to the tower. The styles of both buildings are almost identical.

The Face of Rembrandt’s Danae 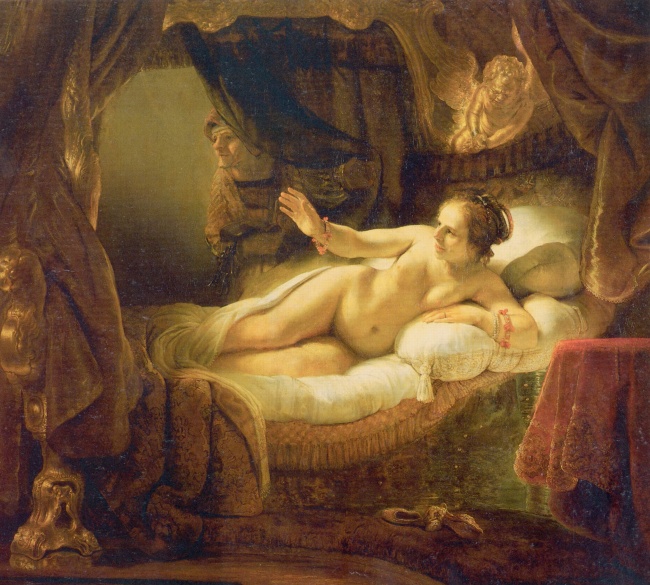 Rembrandt started his work on Danae when he was two years into the marriage to Saskia van Uylenburgh. This artist depicted his wife in most of his works and this was supposed to be one of them. However, the character in this picture looks nothing like Saskia. It is only recently that modern technology found the explanation for this image. Scientists put it under an X-Ray and noticed that there is another image underneath this one. It seems like Rembrandt painted the face of his new wife Geertje after his first wife had died. That is why the new face of Danae is a combination of the facial features of both, Saskia van Uylenburgh and Geertje Dircx.

The Name of The Most Famous Tourist Attraction in Britain 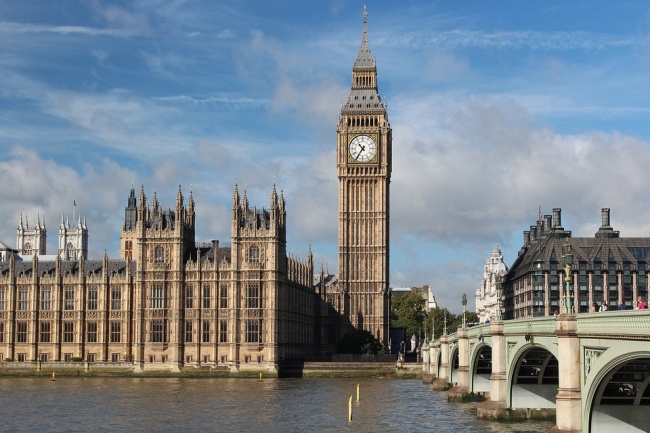 “Big Ben” is not the name of the whole tower, but only the large bell within it. The official name of the tower was “The Bell Tower of the Palace of Westminster”, however, it was changed to “The Elizabeth Tower” in 2012. Now no one knows why exactly everyone calls this structure the “Big Ben”. Some believe that it was named after a huge, powerful man that used to manage the bell foundry where it was made, others believe that it was named after Benjamin Count, a heavyweight boxing champion. Or maybe it was too awkward to just call it “Big Bell”.

The Color of the Golden Gate Bridge 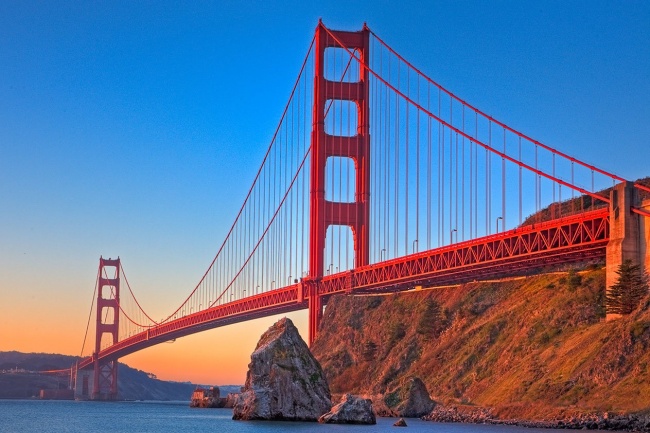 The Golden Gate Bridge is one of the most famous bridges and landmarks in the world. The decision to make it dark orange was made under the influence of the US Navy. Actually, they were the one who stood between the success and failure of actually building this bridge. The main problem was its visibility and they wanted to paint it black with yellow stripes so it could be visible under heavy conditions. However, the main architect on the bridge, Irving Morrow, decided to paint it to dark orange. Now it has a great look and it is visible in every weather condition.

The Sky in The Painting The Scream 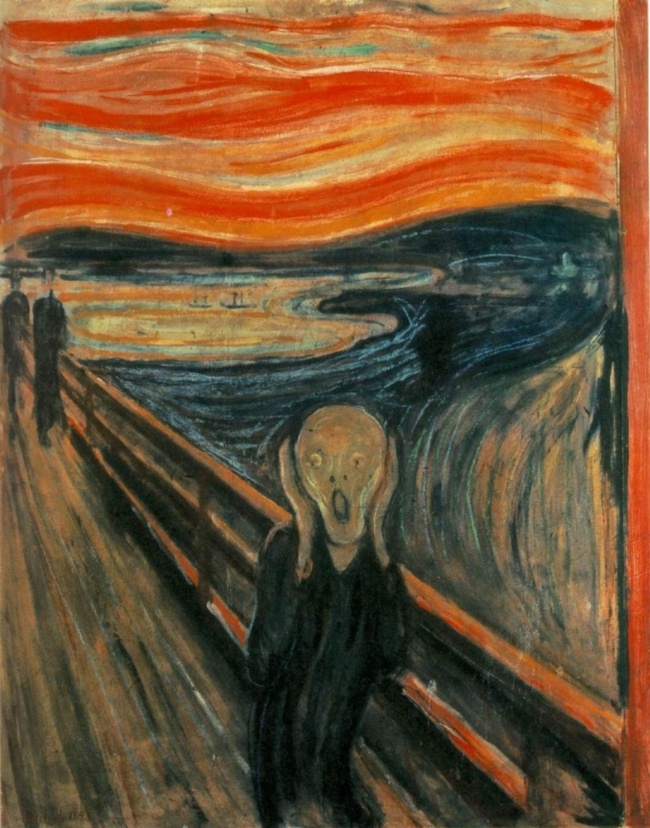 The first name for this picture was “The Scream of Nature”. Edvard Munch, the author of the painting, wrote in his diary about the painting, “…suddenly the sky became blood red; I stopped, feeling exhausted, and leaning against a fence, saw blood and tongues of flame over the bluish-black fjord and a city…”. In 2003, a group of astronomers brought up one of their theories that is extremely plausible. Their theory is that the author was so astonished by the eruption of the Krakatoa volcano in 1883. That eruption caused extremely bright flamelike sunsets that were observed all around the world over a couple of years after the eruption.